I am back again for the Blogging from A to Z April Challenge so have made the commitment to blog every day in April except the Sundays. Some bloggers choose a theme, and others do random posts. For me, a theme works better, so them I’ve chosen for 2016 is Towns in Victoria. I will be choosing  towns with a relevance to my family history, where possible.

R is for Rosalind Park, so well known that it is considered to be an icon of the City of Bendigo. During the goldrush, the gardens were a government camp, which included a police barracks and gaol, a courthouse, gold office and other public buildings.

In 1861, it was decided that the area should be given back to the people and a public park be created. 59 acres of land was set aside  and given to the council of the day, for this project. The first gardener was appointed in 1870 and his plan and basic layout of the park remains today.

Rosalind Park is situated in the CBD of Bendigo and cannot be missed. On a hot summer, daynespecially,  the park is a drawcard to both tourists and residents for it’s cooling atmosphere.

Below are descriptions of the many parts of this incredible park space.

Originally the area of the Conservatory Gardens was a rubbish tip. Today the flower displays are very well known, particularly the tulip display in Spring.

The Bendigo Creeek was originally the main water source for Bendigo. It can be seen on the edge of Rosalind Park.

A natural billabong was filled in to create the Fernery. Some of the redgums were left as protection for the fern plantings.

The poppet head which is now a lookout was originally used at the Garden Gully mine. 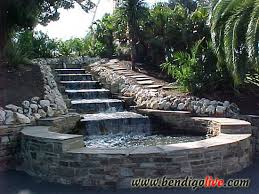 The Cascades were created due to the popularity of water features in the 19th century. They were rejuvenated in 1997, after falling into disrepair.

In the gardens, on the Alexander Fountain Corner, this part of the garden features a statue of Queen Victoria.