A few days ago, I forced myself to get back on the bike.  I know that doesn’t sound like much of an ‘I did it’ moment. But in my world, just now, it’s a huge step forward. Or perhaps I should say it’s a huge pedal forward.

For most of my life I’ve cycled. Firstly, as a child, and then as a young mum with my daughter behind me on a baby seat. There were a few years when I was a teenager that I gave the bike a rest. But that is the only time. Ever since those days of riding with my daughter in her baby seat behind me, riding has been my passion.

I’ve done cycling tours in most states of Australia. I’ve cycled around London and into the surrounding countryside. There was a memorable week spent cycling around Wales with my daughter. I’ve cycled with groups, and bunches, riding at least 60k, and often more, on most days. I class myself as a very experienced rider.

Yet, I’ve struggled to get back on the bike after injury caused me to lose confidence in my riding ability. Two years ago, I broke my arm, which kept me off the bike for 6 months while I had a plaster. After the plaster came off, my arm was very weak, so that meant a couple of extra months off the bike.

Finally, the day came when I had the go ahead to start riding again. On my first day back on the bike I was feeling fantastic. It felt so great to be riding again when suddenly my knee gave out. This meant six more months off the bike! To say I was devastated is an understatement.

I’ve been recovered from the knee injury for months now, but no matter how much I want to get back on the bike, I keep procrastinating. I have been feeling so scared. What if I give it a try and injure myself again? What if I can no longer ride as well as previously? What if my cycling days have passed me by? These are the thoughts that have been running through my head.

So many times, I’ve thought about and tried to get back on the bike and failed. Mainly due to loss of cycling confidence and worry that my cycling days had passed me by. 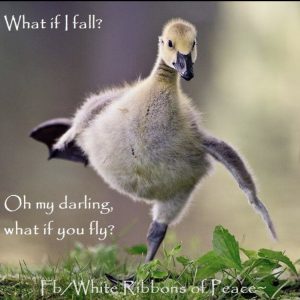 A few days ago, I made a sudden last minute decision that enough was enough, and this was the perfect day to start pedalling again. I took the trail bike out into the bush near our house.

The area where I rode, in the bush surrounding our house, was very hilly and the surface was extremely rocky and difficult riding. It didn’t matter. I rode slowly and I didn’t fall off. I hadn’t forgotten how to ride. 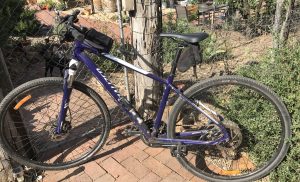 I’m very happy to report that my cycling days have not passed me by as I thought. I really am looking forward to the next ride, and looking forward to making slow progress until I get back to the standard of rider that I was before I was injured.

I feel much fitter when cycling is part of my exercise program. Walking is great and I love it. But it doesn’t matter how far I walk, I always feel that I get more benefit from cycling.

The next big cycling goal is to get back on the road bike. Since I was injured, I’ve found that I seem to have lost my nerve a bit. Road riding is my favourite form of cycling,  so I will be extremely excited on the day that I beat those nerves and get out onto the road again. I’m sure you will hear about it when it happens.

Have nerves or lack of confidence ever stopped you doing something that you are passionate about?  I would love to hear about your experiences and promise to reply to all comments.