Two years ago today, I walked into Finisterre to complete 1018 kms walking the Camino de Santiago, across Spain.  I just thought I would mention it today, as I didn’t say anything much about it at the time. The end of the Camino for me was very much an anti climax and I still think I haven’t had entire completion in my mind.

I had actually completed the official Camino at Santiago, but from when I first decided to do this pilgrimmage, I knew I wanted to walk the extra distance to the Atlantic Ocean, which in medieval times was considered to be the edge of the world. 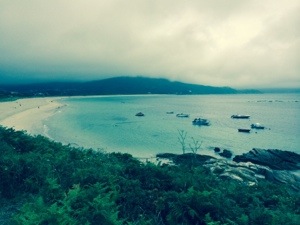 I had planned to take three days to walk the extra distance to Finisterre – about 90ks.  But at the end of the first day, I received the news that my father had passed away. From then on, I just wanted to get home as soon as possible. Getting home was going to be complicated from where I was, and I was really worried that I would miss my Dad’s funeral.

After making enquiries, it was obvious that the only way to get home was to continue walking to Finisterre. The walk between Santiago and Finisterre is much more isolated than the Camino had been, so there was nothing for it, but to walk. The next day, I walked over 50k in pouring rain – alone, sad and crying most of the way. It still brings tears to my eyes, thinking about it. This was the worst day of the entire Camino for me. I was wet, I was grieving and I did not want to walk. I just wanted to go home.

On reaching Finisterre, I needed to be alone so decided to book into a B&B instead of staying at the crowded albergue. From there it was a long trip to Madrid airport, by bus and train and another overnight stop at the airport, before finally flying out of Spain towards home. That was also, after paying the huge amount the airline demanded to change my tickets. After charging me thousands of dollars extra, the airline lost my luggage! I should say that the luggage did eventually turn up a couple of days after I arrived home.

I would love to go back and walk Santiago to Finisterre again, as it’s a bit of a blur to me. I remember that, after the last 100k on the Camino to Santiago,  being very crowded, especially with noisy school groups, it was such a relief to feel isolated again. I saw very few people walking the route after Santiago, and actually was concerned a few times whether I had wandered off the track, as it was so quiet.

The Lighthouse at the end of the world, known as Faro de Fisterra. 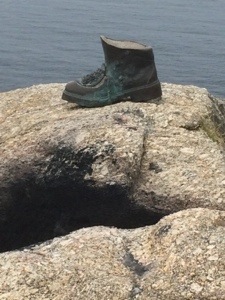 Bronze boot mounted in stone – A symbol of the end of this part of the journey. Some pilgrims choose to burn their boots at a firepit nearby. There was no way, I was burning my much loved boots that never let me down. 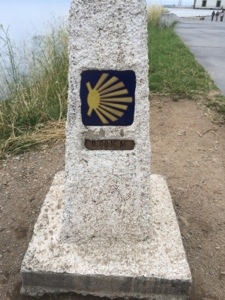