The following reports combine my love of fitness and history. The first report is meant to be a report about one of the first female cycling races. But it very quickly becomes a report of female cycling fashion. I couldn’t resist posting the second report which is about the new cycling fashion craze of knickerbockers, with a detailed description on how they should be worn.

Thankfully times have changed since 1896

“We have not had to wait very long for a ladies’ race in England (says the Queen of November 23). The enterprising manager of the Aquarium has got up a contest between some of the best French and English riders, and the race, which began on Monday afternoon, is to continue daily for twelve days. The competitors have been divided into two sections, each of which is planned to run four hours daily in alternate periods of two hours apiece.

The track is very narrow with difficult and very dangerous curves at each end, and if falls continue to be as numerous as they were on the first day, there will soon be only one much reduced section left.

On Monday the French riders showed themselves much more skilful at the corners than the English who repeatedly fell. Mrs. Grace, who has made such remarkable records lately, had a bad fall, and had to retire, and it looks, at the time of writing, as if the French riders would have it all their own way.

It is a pity that the race is being ridden under such disadvantageous circumstances. Nothing smaller than Olympia is suitable for such a purpose, and there ought to be a law regulating the size of track on which such contests can safely be held.

The event will doubtless have its uses in the way of accustoming the English eye to the knickerbocker dress, which, by the way, is being tried on the quiet, in fashionable circles.

Of those we saw on Monday, Miss Clare Gamble with tall athletic figure clad in a neat fawn coloured jacket and knickerbockers, was the most. taking to the eye. Her form on the machine was perfect, but she was obviously afraid of the track, and never exerted herself much.

The French riders all wore the very full culottes with either woollen jersey or shirt, and a sash round the waist.

Knickerbockers are taboooed by some of the leading cycling clubs, (remarks “Madame Weigel’s Journal”) but those who are strong minded enough still continue to wear them, evidently to their own satisfaction. The very full knickerbockers are not worn at all.  But a but a modest medium, which, while not making the figure bulky, do not show its outlines, which are thought undesirable of being seen, are adopted.

In Paris knickerbockers are favoured by all the lady cyclists. The skirt worn in cyoling should be so conveniently short as to avoid any hampering of the feet, and there should be no braid or lining to catch. At the bottom the skirt should be turned ,up a good 6 inches all round, and the double thickness stitched in rows to consolidate the hem. To this hem,and at about 18 inches apart in front, are securely sewn two pieces of broad elastic.  Each bit ends in a piece of leather with a buttonhole, that will be fastened to one of the buttons of the gaitors and keep the skirt down in any wind. Another plan is to sew a circle of elastic in the same manner to the skirt, and pass this over the foot, lodging it to the part of the leg necessary. Gaiters are an undoubted advantage. Boots ought not to be worn,and the gaiters prevent the entrance of sand into the shoes, besides protecting the ankles, as is called for. Shoes for wearing should be light and strong, the heels low,and the toes broad. 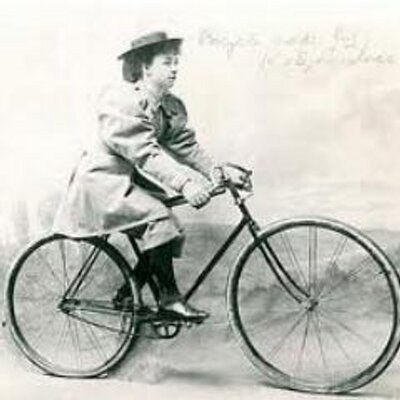