This year is the five year anniversary of my Camino walk, which began on 1st June and finished on the 7th July. I hope you will enjoy the series, and I particularly hope that anyone contemplating the Camino will find these posts helpful. Buen Camino!

On day 13, at about the 15k mark, I arrived at the start of The Meseta. This is the Central Spanish tableland between Burgos and Astorga. It is slightly dreaded among pilgrims, as being very open, flat, and boring with fewer villages than usual to pass through, and very, very hot. From memory, I think it took five days to cross, so that’s five days of totally flat and very hot walking.  Many pilgrims decide to give the Meseta a miss, and take the bus to Astorga. There is no way I was going to do that.

While at home in the Camino planning stages, I decided that the challenge with the Meseta would be  mental rather than physical, as it is very famous for messing with pilgrims’ heads. I was a little concerned about becoming bored, but had a feeling that I would enjoy it. I am usually happy with my own company, and am able to zone out and take my head elsewhere when necessary. For example during long boring sessions on the treadmill or crosstrainer in the gym.

This proved to be exactly the case. The Meseta is long, flat and hot, but I found it very beautiful. The huge skies and the colours around me were incredible. I found so much beauty in the scenery. The wildflowers, which fortunately were blooming while I was there had to be seen to be believed.  I had taken six weeks out from my business which was a busy cafe, which gave me much to think about while crossing the Meseta. The cafe was always noisy and I spent most of my days talking to staff or customers, so the calm and quiet of the Meseta was exactly what I needed. The last few years of my life had been quite stressful and unsettling, so there was much to think about.

I think I solved most of my problems while crossing the Meseta. Some of the solutions, I immediately forgot about, but others I brought home with me and instigated. I also spent time thinking about the next range of mountains that were getting closer every day. Those mountains that I was dreading. 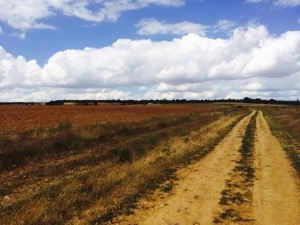 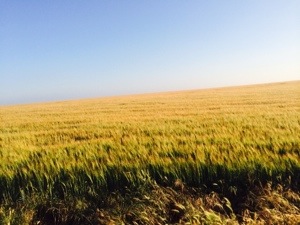 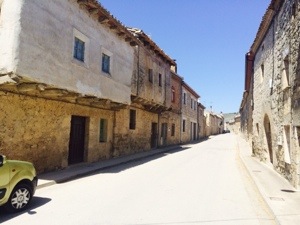 Before starting to walk across the Meseta, I had been looking forward to the city of Leon. But, after the Meseta, where I did tend to zone out and spend time in contemplation while walking, Leon was like a nightmare to me. The traffic sounded too loud and fast and all the usual big city noises seemed to be amplified. I was planning to spend two nights there, and had booked a private albergue, which was a very high standard, but decided to move on after one night. I did enjoy my time there, but felt that I needed to get back out onto the path and walk. It didn’t seem right swanning around in a city, and sleeping in a beautiful, luxurious bed for more than one night. I needed to get back on the pathways and back into the albergues

At about the halfway point, in a tiny, tiny village, there was a lovely man, with the most beautiful, happy, smile with fresh fruit including bananas, freshly squeezed orange juice, chocolates, muesli bars, dried fruits, nuts and much much more. And all for just a donation. This is not an uncommon occurrence. I came upon roadside stalls often. Most times all they wanted was a donation or ‘donativo’. The generosity of villagers towards pilgrims really causes me to feel very humble. I just hope they realise how much they are appreciated. Every day villagers would wave hello or stop me to ask where I was from and if I was enjoying the Camino.

They would farewell me with the pilgrim greeting “buen camino”. 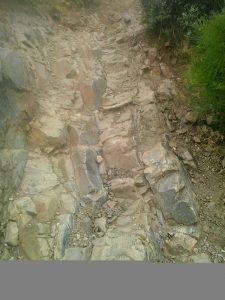 Many of the pathways are old Roman roads and extremely rocky. I realised very soon after I set out, that I had probably done enough training, but the training was likely not correct. Instead of walking around the suburbs of where I lived, I should have been walking on bush tracks to harden up my feet a bit more. After the first few days, the bottoms of my feet felt like they had been pounded for hours with a rock. As they had after whole days of walking over rocks. But it wasn’t a big problem and they soon hardened up.

The days that were spent walking on smooth pathways were a luxury.  The path in the photo  was a very steep ascent on a very narrow track. Walking on this day was extremely difficul for the entire day. At times it was necessary to hold on to the bushes for balance. Even hiking sticks didn’t help much as there were too many rocks and nowhere to get a grip.It seemed that the path climbed up to the sky that day. It went up and up and up and was so rocky that getting a footing was difficult. And then it became a descent. And then there was rain! The path became very hazardous and very slippery, very quickly. This went on all day, which is why I say that this was the least enjoyable day for me. My dodgy knees didn’t enjoy either the ascents or the descents that day 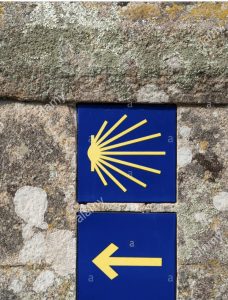 Most of the Camino is marked by arrows such as in the photo (left) making it easy to follow the correct path. When it gets more difficult,  is when the arrow is less prevalent in the larger cities. Getting into or out of a large city can be quite difficult sometimes and becoming lost can add a large chunk of time to an already long walking day. I found the mornings were the most hazardous, as I usually started out before light, and it was easy to miss the arrows in the dark.

One morning, as I was trying to find the arrow leading me to the path, I passed a nightclub where there were a few people still milling around and mostly intoxicated. One of the men started to follow me. It was still dark, and there was nobody at all around. Most pilgrims were still tucked up in their albergues. I’m sure he didn’t mean any harm, but it freaked me out a bit as he followed me around every corner I turned. Eventually, I realised he was no longer there. I also saw that in my panic to get away from him, I hadn’t watched out for arrows, and I had no idea where I was so had to try to find my way back towards the albergue and start again. A couple of years later, a female pilgrim was murdered in this city. I can’t help but wonder if her murderer was the man who followed me. Please, don’t get the wrong idea about this isolated incident. The Camino is generally very safe. Other than this incident, I didn’t have a moment where I didn’t feel safe.

I had a laugh when I read the following post that I wrote on Day 18. I can remember every moment of that day, with the panic I was feeling. I definitely wasn’t laughing at the time.

What a day it’s been today. Walking alone and I accidentally left the guide book behind at the last albergue. At first, I wasn’t really too concerned, as the pathways are fairly clearly marked. Most of the time! The main reason for any concern I had, was that I had made a reservation in a private albergue, who’s name I could not remember. And it was in a village who’s name I also couldn’t remember! But I was fairly confident that the pathway, as it usually does, would almost lead to the front door.
All went well until the fork in the path, where there were two options. Oh dear, I didn’t recognise either village name. And yes, you guessed it, I took the wrong fork and ended up in the wrong village.
A lovely lady in a bar who spoke good English called me a taxi and off we went to the correct village. Today, being without a map, I did feel a little like the pilgrims in days of old. 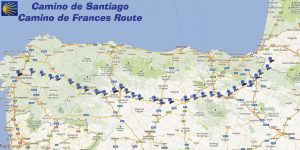