I posted previously when I started Maxine’s Challenge and also again after Week 8  It’s hard to believe, but the 12 week challenge is now over so it’s time for a final wrap. The point of doing the challenge for me was to improve my strength and add variety to my weights program in the gym. I had done Maxine’s Challenge previously and really enjoyed their strength programs.

This program for me, was about getting stronger. I have had a weakness in my wrist after a bad break to my arm in 2016.  I was in plaster for almost five months and my arm and wrist had become very weak. I was aware that I had become nervous of increasing my weights. I followed  the exercise program almost to the letter, just making a couple of changes to avoid doing lunges and squats as advised by a sports physio. I’ve had a chronic knee injury for years which over recent years has become difficult to manage, I found over the 12 weeks of Maxine’s Challenge, the replacement exercises have given me more strength and confidence in my knees. Also my arm and wrist have become noticeably stronger. At the end of the program my weights have all increased. A couple of them have doubled which I’m very happy about. This is a great result.

I’m not saying I couldn’t lose a few kilograms. Yes, I definitely could, and probably should. But weight loss was never one of my goals for this challenge. By the 8 week mark, I decided to see what would happen if I tried to be a little more focused and followed the nutrition plan for the last four weeks.Surprisingly, the extra focus caused me to lose 2 kilos in the last four weeks of the challenge. This was an unexpected but very pleasing result. There is probably a big lesson in that for me.

I am very happy with my results even though, compared to some of the participants, they are very modest. I will definitely do the challenge again, but probably later in the year. I’d like to continue with the current program and don’t really need support for that just now. 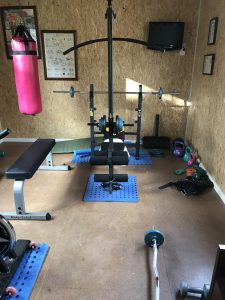 Where you will find me early mornings on week days