I’ve been trying very hard to put the incredible Camino de Santiago behind me, but finding this difficult as it was such an amazing, incredible experience.

So much happened, good and not so good, and so far I haven’t really talked about it.

Yesterday the guest speaker at our Networking Bendigo meeting, was Linda Beilharz, a very adventurous arctic explorer who is from Bendigo. Her adventures leave mine behind. But she talked about her training and self doubt before starting her epic journeys to the north and South Pole.

Everything Linda said resonated and took me back to Spain. I definitely had my doubts at times about whether I was capable of completing this epic journey.

I was particularly worried about the first two days, crossing the Pyrenees. For many years, I’ve stayed up till the early hours watching the Tour de France, and almost feeling their pain, as the cyclists conquered The Pyrenees. This put unexplainable fear into me.

Day1 came and off I went, starting off in light misty rain and feeling very nervous about what was to come. I had decided that all I could do was put one foot in front of the other, again and again, until reaching the top hopefully. It was a tough day, but I felt elated to get to the overnight stop.

Day 2 was higher, tougher and wetter, and became tougher and wetter the higher I climbed. I walked all day alone, at times through mud above my ankles where staying upright was a miracle. At times the fog & mist was so thick it seemed impossible to see a couple of inches in front of me

Despite all the challenges the weather and environment threw at me, this day turned out to be my favourite of the entire 6 weeks.

At the end of the day as I hobbled into the village of Roncesvalles, I was so proud of myself and my accomplishment, that I felt I would burst. 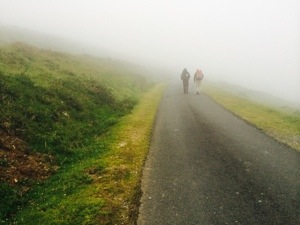 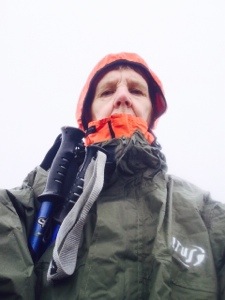