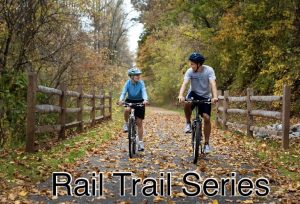 Twelve years ago, I lived just outside Rushworth, in Central Victoria, on the foreshore of the Waranga Basin, a huge man made water reservoir which was created in the early 20th century to provide water for famers, to irrigate their properties. Just before I moved, discussions began about the old railway line being turned into a rail trail. Being an advocate of rail trails, I was very keen to see this short, family friendly trail developed, so joined with local residents to form a committee. Unfortunately, shortly after, I moved without notice, and lost all contact with my neighbours and committee members.

I was so pleased to see the trail opened in 2015, and am very proud to say that this trail is everything I imagined it to be and more. The trail passes through very open country, wetland areas, and heavily treed forests. There are many kangaroos in this area. You are sure to see one or more as you ride along this very quiet and peaceful trail. 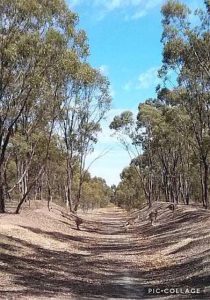 The rail trail starts at Rushworth, which is a 19th century gold mining town, where many hopefuls, from all over the world, came in search of their fortune. There are many signs of the history and prosperity of long ago, around this small town. Allow time to investigae and learn about days of long ago. The mosaic below, situated at the beginning of the trail, tells the story of the history of the railway and gold mining in the town. At about the halfway mark, the trail passes the Waranga Basin on the freestanding historic rail bridge, and continues on to Murchison, a beautiful small town, situated on the Goulburn River. 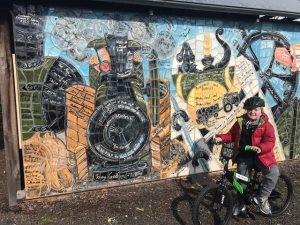 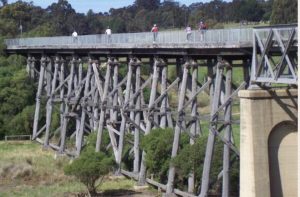 Where the rail trail leaves Rushworth, there is a children’s skate park. When I was on the trail with my grandson,he spent a fun filled half hour riding his bike up and down the jumps. He would have stayed longer, but we had a trail to ride. We both loved the artwork, using old bikes and bike parts, over the entry to the skate park. 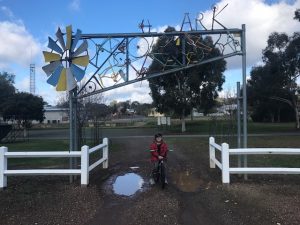 This trail is only 20 kilometers long, and is very flat, making it suitable for families. As yet, there is no transport back to the start, but hopefully, as more families are seen on the trail and the demand increases, a shuttle bus service will become available.  The surface is hard packed gravel, and suitable for mountain bikes and hybrids. I wouldn’t recommend this rail trail as being suitable for road bikes. 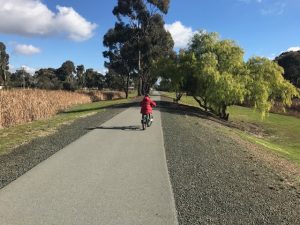 Murchison, at the end of the trail, is a small town with beautiful picnic grounds, on the river bank, and a great bakery, which would be a perfect stopover, before tackling the ride back to Rushworth. There are no other towns along the rail trail, between Rushworth and Murchison, so be advised to replenish supplies and water, at either town, depending on the direction being ridden.

Being in the heart of Central Victoria, this rail trail is situated in an area, that is ideal for a weekend getaway. Both ends of the trail are just a short distance from larger cities with all amenities.