With the New Year just a few short weeks away,  I’ve been thinking quite a lot about goals for 2016. Most of them so far are on the bike. They’re not set in concrete yet, but I will post them closer to the end of the year, as soon as they are clearer.

But today, I came across a running goal.  My super fit  friend Tina invited me to the Run the New Year 2016 – Virtual Run. I’ve entered to run 100k starting on January 1. Running any time I want but to be finished by January 31. I’m heading off on holidays on January 30, so what a great goal to get done before leaving. I will be doing it on the treadmill, which is permitted.

Check it out if you’re interested. I’d love anyone else who’s entered to post in the comments. We can keep ourselves accountable 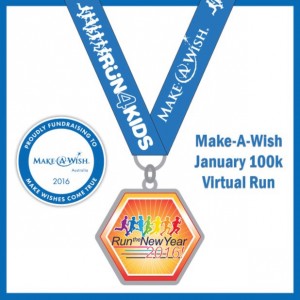