The following post is a repost from April 2013. I”m not reposting it to brag or to live in past glories at all. Recently I had been thinking about goals, following our dreams and positive ageing, when these memories came up on my Facebook page. I think this post shows that we can make our dreams come true and achieve our goals. All we need is a plan. Having the dream or the goal isn’t enough. A plan is needed to make sure we achieve the goal. Without a plan, it won’t happen. We planned our 100k walk and we trained for it. I have many readers now who wouldn’t have read this post in 2013, so I thought it might be interesting for them to see what is possible no matter the age. It is my strong belief that age is definitely no excuse.  I understand that some people have limitations and injuries, that they need to work around. These people can still set goals or have dreams that are big for their circumstances.  A big goal is different for everyone, depending on what is happening in their life. A big goal doesn’t necessarily mean that you have to walk 100k.

Finally the day had arrived. The day my friend Nadine and I had been training towards, over the past 6 months. The day we were both looking forward to and the day that I was also dreading.  Nadine was calm as the day approached, but as usual for me it was stress, panic and worry that I hadn’t done enough training, and wasn’t well enough prepared to take on this ridiculous walk of 100k in one day.  This wasn’t an organised walk for charity. It was just Nadine and I walking from Melbourne to Sorrento. Just the two of us. Walking until we arrived. No sleeping, and no support, except for our amazing friends who dropped by to say hello, replenish our water and deliver our warm clothing to save us carrying it for most of the day.

As I met Nadine at the station, my nerves were getting the better of me. During the week before, my training had been not as good as it could have been, and I was doubting myself. Could I do this? Why did I come up with this stupid, ridiculous idea? Would my feet stand up to the pressure? If they didn’t, would I be able to take the pain? Would I have to pull out?  This was the scariest thought of all. Until now, pulling out just wasn’t an option. I would be letting myself down, but worse than that, I would be letting my buddy Nadine down. All of these thoughts were running through my head on the train journey to Melbourne. The quicker we got this nightmare started, as far as I was concerned, the quicker it would be over. 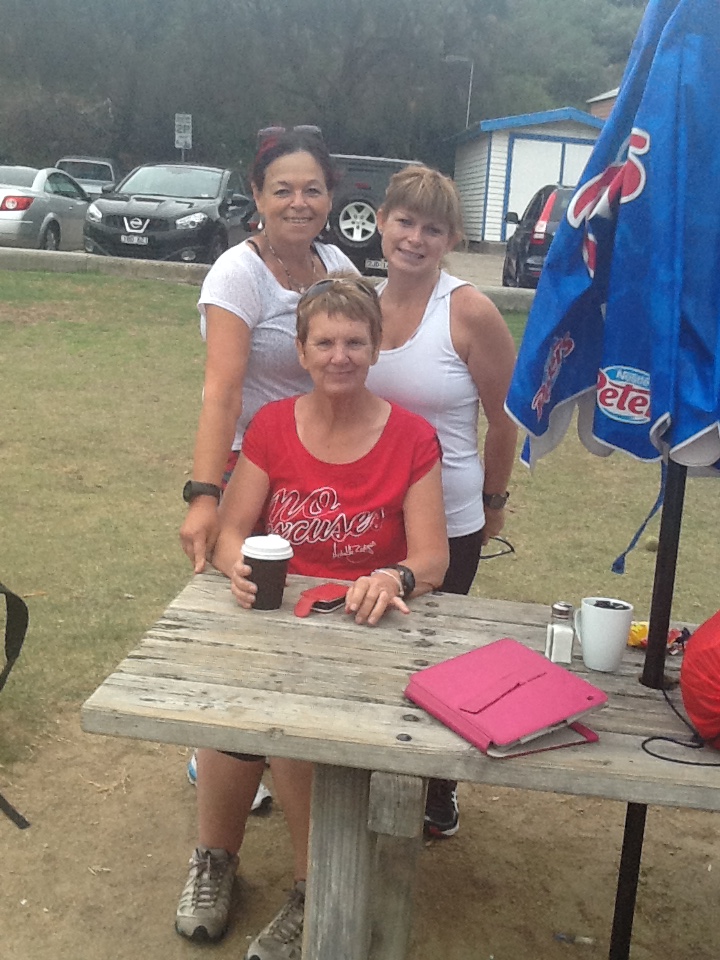 We set off from the Flinders Street Clocks in central Melbourne at 9am. My good friend Tina walked the first 6 hours with us, which we very much appreciated. There was lots to chat about with Tina and lots of laughter along the way. Soon we were at Sandy Bay Yacht Club, where we made a quick lunch stop.  It was then time to wave goodbye to Tina and set off on our merry way, not sure of what lay ahead for us. 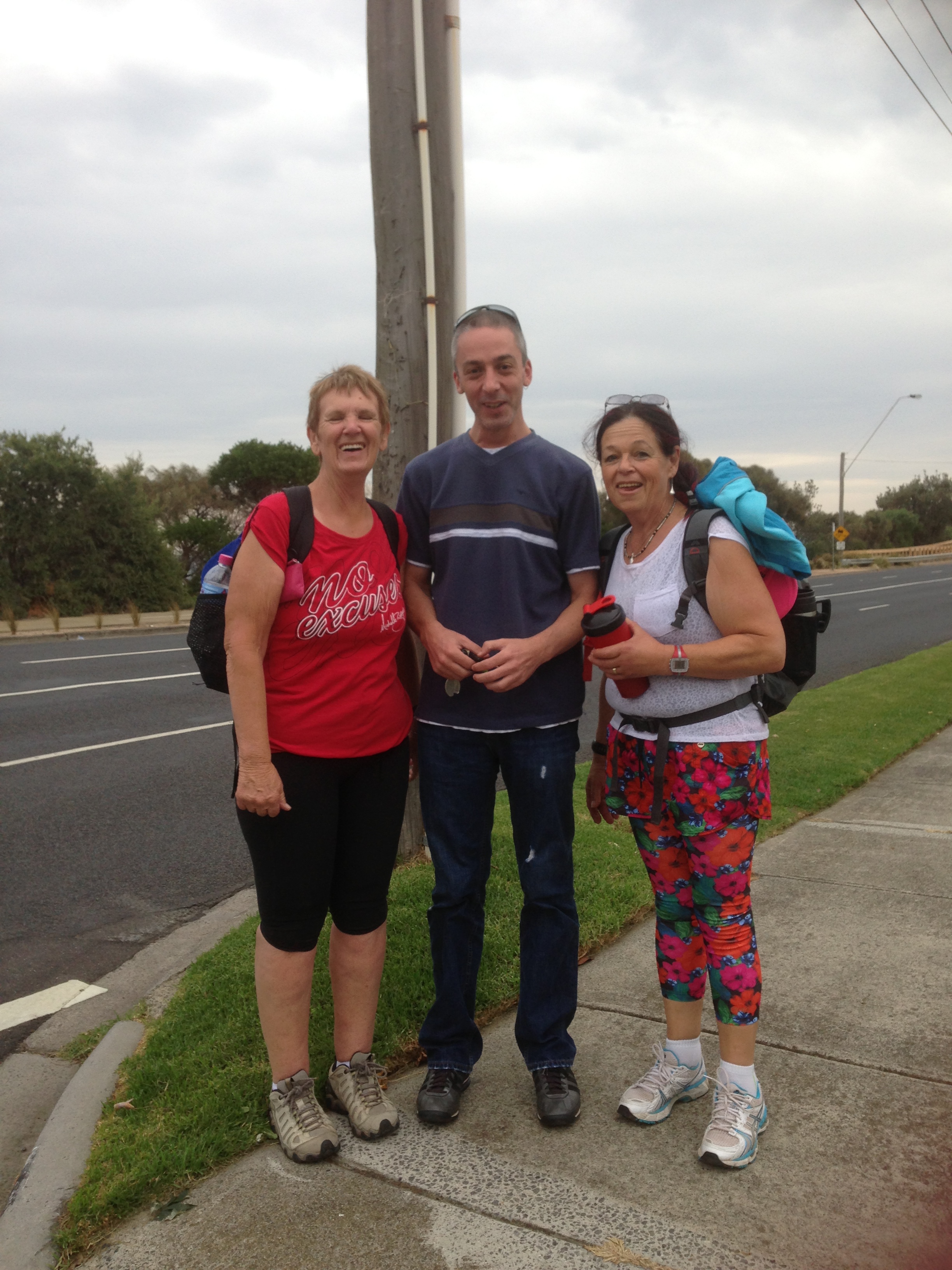 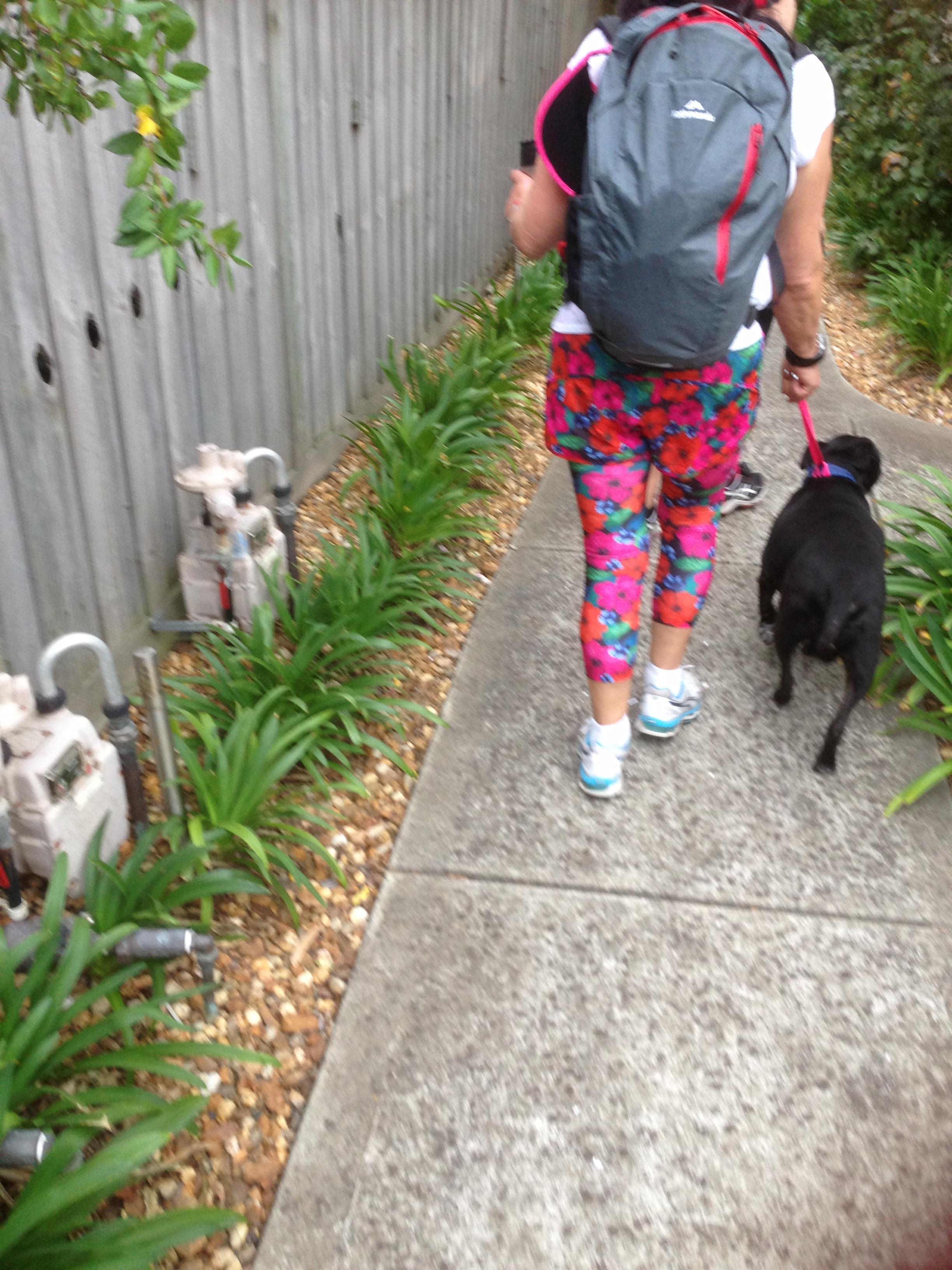 and lost and trying to avoid the heavy traffic to cross the road. His tag told us he was Fergus and his phone number, so we called his owner and left Fergus at a house nearby until his Dad arrived to collect him. Fergus was adorable and such a cutie. Meeting him was a highlight for us both 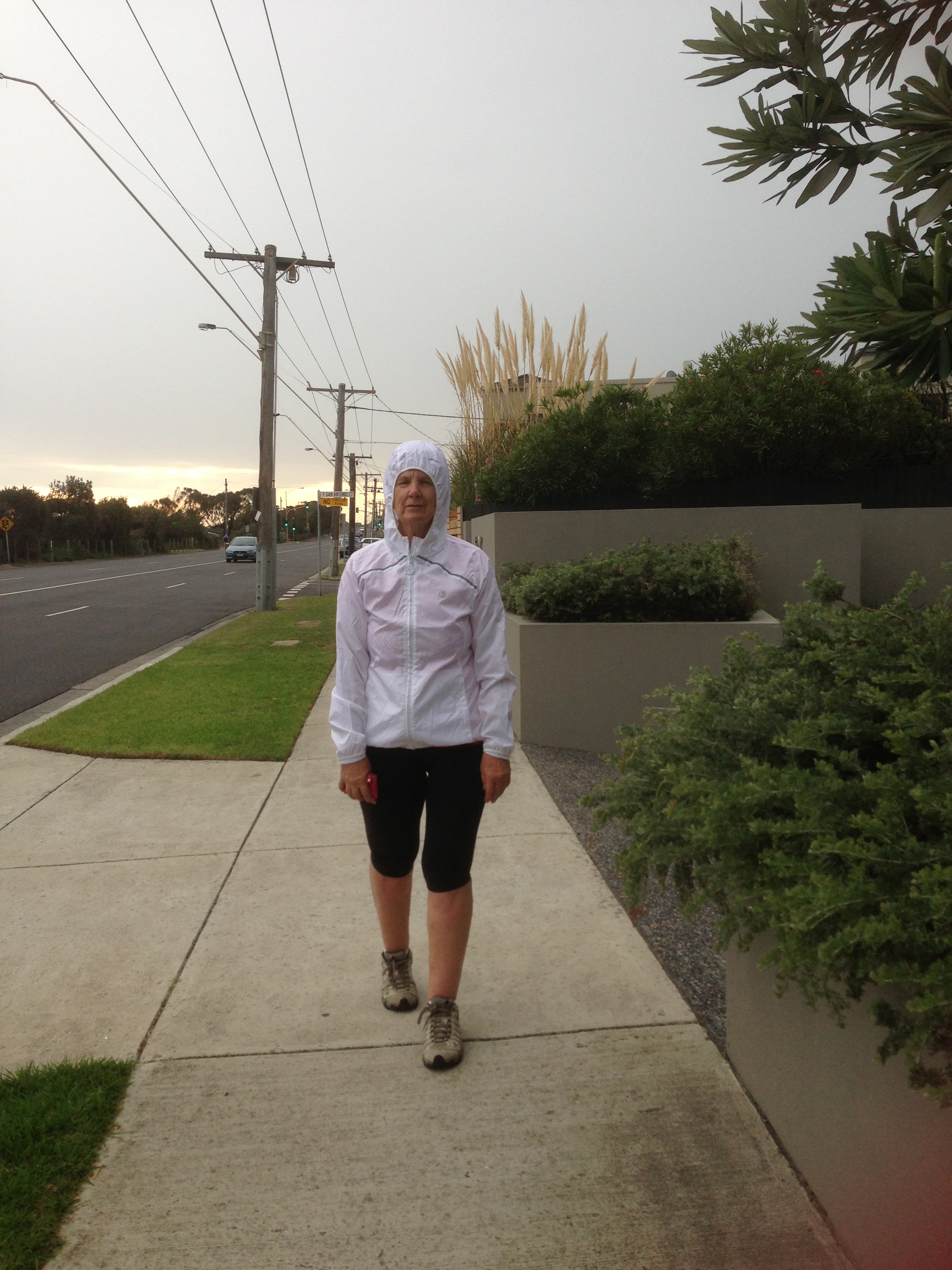 During the middle of the afternoon there was just a short patch of rain. Just a couple of very light showers and nothing at all to worry about. The showers soon cleared and the coat came off. We were so blessed with the weather. The Gods certainly were smiling down on us. We walked right through the night in short sleeves with just a light spray jacket. This was a surprise  to us, as we had expected the night to be a bit of a challenge, due to the weather. 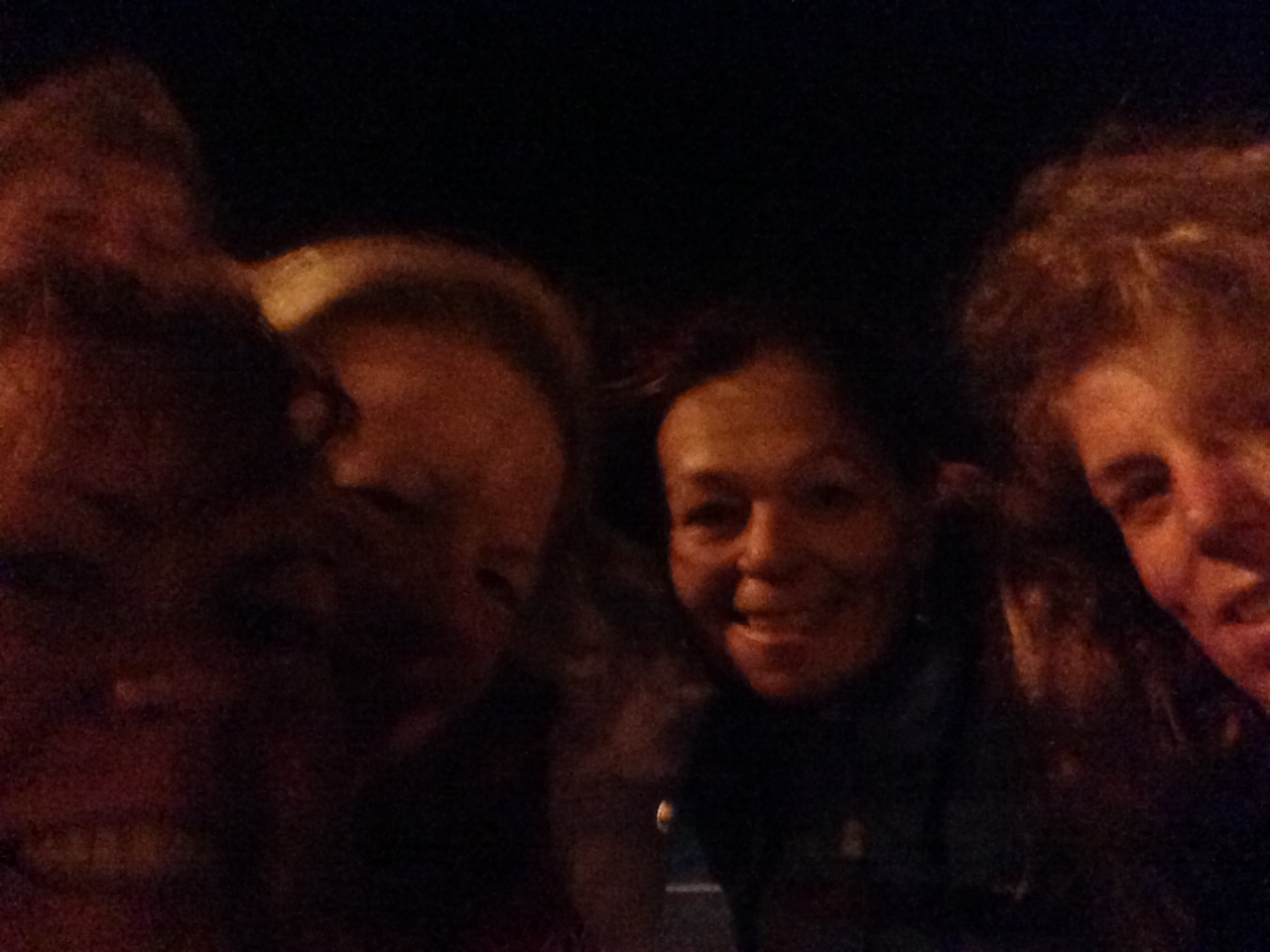 In the late afternoon the Bendigo 12wbt girls, Sue, Yvette, Pip and Tania turned up. And of course Tania’s buddy, Drew, the sweetest little dog ever, was there to spur us on.  Nadine and I are so so grateful for these girls for driving to Melbourne, specially to bring us warm clothing. As it turned out we didn’t need the warm clothing, but it was great to dump our extra gear in their car, and continue on with lighter packs.  Tania and Yvette walked quite a few ks with us, which also helped to pass the time.  As dark fell we waved off this happy bunch, of ever laughing gorgeous friends. The photo below is very poor but I think  shows the fun that was being had. We will never forget what you did for us, girls. You’re amazing friends.

We hit the halfway mark at Frankston, at about midnight. We both felt fantastic at Frankston, and weren’t suffering at all.  A little voice in my head was telling me that yes we could do this, and all doubts were banished. We just needed to power on to the finish. Actually as we set there pondering our progress, we couldn’t stop smiling. Everything was going according to plan so far. Frankston was a  longish stop, as we intended to continue on non stop to Rosebud. From Frankston we walked along the edge of the Nepean Highway. In retrospect, this probably wasn’t one of my best ideas, but we considered it to be safer than the dark and secluded walking trail along the beach. As planned, we walked non stop to Rosebud. This took about seven hours. It was tough and hard, and at times difficult to put one foot in front of the other.

Rosebud was our breakfast stop. So after a longish stop, we had 14k to go to Sorrento. I really felt every step after Rosebud. Not physically but mentally. My feet and body felt good, but I just wanted to stop walking and lie down and sleep. We were so tired. We found the tiredness to be more of a problem than anything physical. Our feet were ok, but they were also tired. At this stage, all we needed was sleep.

So the question everyone seems to ask me  is ‘would I walk 100k again?’  No I would not! Not ever! I’ve done it now. It’s crossed off the bucket list and I see no need at all to do it again. It’s not that we suffered badly, but mentally it’s a tough ask to walk 100k.  However, the  main reason for my not ever doing it again is the training.  The need to walk and walk and walk, just did my head in. I put the bike away about ten weeks before the walk so I could concentrate on walking. I walked every week day for 2 hours and 5-6 hours plus on the weekends. The training caused huge impacts to my life. I was constantly stressed about it, and wishing I had time to do more, but at the same time I worried that I was over training. Also there was a huge impact on my family. Over the past couple of months, I’ve had to be selfish and focus on me. This has impacted on relationships in my family. Some family members don’t understand why I’ve had to keep to myself more than usual. Now that the walk is over it’s time to try and do some healing there.

At the moment, I’m thinking about my next big goal or dream. I’m not sure yet what that will be. Do you have a dream? Or a huge goal? I’d love to hear about it so do join in the conversation. I promise to reply to all comments. I do love it when we engage.