Tomorrow, 15 September, is the 20th anniversary of the Sydney Olympics. I hadn’t given much thought to it until I noticed that Denyse’s prompt forLife This Week is Remembering Sydney 2000.

At first I was stumped. What could I possibly write about for this prompt?  Before long, my mind wandered back to where I was, in my life, at the time.

In the year 2000, I was still married and living in the dream home that we built overlooking a large lake, in an almost secluded area. In September 2000, we had been living there for 8 months, and life for me was very busy, turning 8 acres of rock into a beautiful garden which included over 200 roses.

This was all done, while working full time in our business, which at that time had been operating for 23 years. The business continued on until we sold it to our son in 2003. He has recently sold it, in order to move his family to Queensland. I feel very proud of what we achieved with that business, which we started from nothing, knowing very little about running a business. This business gave my family, and later my son’s family a really great lifestyle for over 40 years.

But back to the garden. I have very strong memories of getting semi trailer loads of cow manure delivered, which I moved with a wheel barrow, every day, after work, and on days off,  for weeks on end. We also had truck loads of gypsum delivered, to break down the rock. This also had to be wheelbarrowed to the garden beds. It was really hard work, but I loved it. I loved creating the garden that I wanted in the beautiful location that we had chosen.

Years earlier, before Sydney 2000, I was a huge fan of the Olympics, and would sit up all night, if necessary, watching the events. The swimming and athletics were my favourites, but I always aimed to watch all that I could. By the time the year 2000, and the Sydney Olympics came, I had become very jaded about the Olympic Games. There had been so many drug scandals, over the previous years, which made me less inclined to believe the magnificent feats that I was watching. Countless times, after an exciting event, with an amazing time, and after staying up all night to watch, we would be told that the athlete had tested positive for drugs.

Because of being disappointed so many times, I had decided that I wouldn’t be watching the Sydney Olympics. I can remember telling people that, no, I wasn’t planning to watch and they would be shocked, and tell me that I couldn’t not watch. After all the Olympics would be in Australia!

As the event came closer, talk began about the opening ceremony. No, I wouldn’t be watching that either. Even when I was a huge Olympics fan, I didn’t watch the opening ceremonies. I was only interested in the events. Again, my friends told me that I would have to watch. After all, this was an Australian Olympics!

The day of the Olympics arrived and as I was working in the garden, listening to the ABC radio, I could sense the excitement building, until I could no longer resist. I would watch, just so that I didn’t miss out on something, that it seemed like everyone in the country would be watching. I would watch, but I wouldn’t get involved or enjoy it. I would watch with one eye, while reading a book. That was the plan.

I will never forget when the theme from Man From Snowy River started, and 120 horses, their riders dressed in Aussie Drizabones and Akubra hats, entered the arena, cracking their whips, and riding in formation, to form the Olympic rings. This was to represent  the contribution that the Aussie Stockman made to the creation of our young nation.  The entire opening ceremony was a celebration of our history. Well I was hooked! My eyes were glued to the screen for four hours, the book forgotten.

The Opening Ceremony started off on a high and didn’t disappoint for the entire four hours. I will never forget the excitement towards the end, when suprisingly, Australian athletic hero, Cathy Freeman lit the Olympic Flame. There were tears later, as the 120 horses appeared again, this time with the riders carrying the Australian Flag.

The following video is a 10 minute clip showing the horses and other highlights. It gives me goosebumps, even today, watching it. Today I read a fact that I hadn’t realised at the time. The opening ceremony of the Sydney Olympics involved 12,687 performers.

After the high of the Opening Ceremony, I watched every event that I could possibly watch. I remember the Aussie stars breaking records in the pool, and who could forget the record breaking American sprinters. Of course the highlight was Cathy Freeman winning the gold medal under huge and unimaginable pressure from the media and fans. Who could forget seeing her for the first time in the amazing body suit? 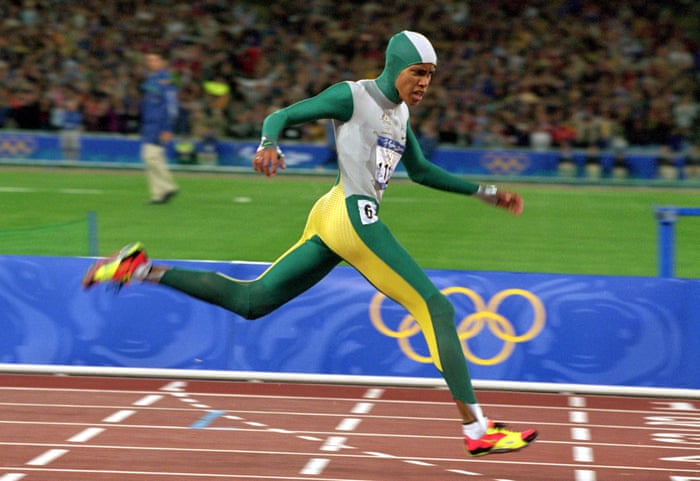 Another unforgettable highlight was sports/comedy TV show, The Dream with the well known Australian comedy pair, Roy and H.G. The Dream was held at the conclusion of the days events to discuss, as only Roy and H.G could, the events of the day. This show started off in a very quiet understated way. Australians knew what to expect from much loved comedians Roy and HG. The international athletes had no idea, but it wasn’t long before the athletes made themselves available and queued up to appear.

The show was presented with mock seriousness and nobody was immune from being the brunt of their jokes. In a playful way of course. So much so, that the athletes loved appearing. Who could resist the disparaging mascot, Fatso, the fat-arsed wombat, who was created as a protest of the commercialisation of Olympic mascots. Fatso was an Olympic sensation.

The closing ceremony also didn’t disappoint. If you had asked me before the Olympics started, if I would be watching the Closing Ceremony, I would have laughed. Of course I wouldn’t be watching! But that soon changed. I’d like to have had someone try to stop me.

The closing ceremony was quite cheesy, showing our Australian Icons, such as the Hills Hoist and many of our popular successful entertainers. I feel that Australia had earned the right to be cheesy on this night of celebration.

Surprisingly, I have many more memories of the Sydney Olympics that I ever would have thought. They were the highlight Olympics for me. Sadly, since then my jaded opinions about commercialisation, money and drugs, have coloured my opinion of subsequent Olympics.

I did intend to give up those thoughts and watch the Tokyo Olympics this year. Of course, the pandemic arrived and that was the end of that. But that’s another story entirely.