This walk was at Chewton, near Castlemaine, starting on the Garfield track, and heading through old gold diggings, where many signs of gold mining can still be seen. The start was an ascent for about 1.5 kilometres, which gave an idea of what was to come. Most of the walk was on rocky, four wheel drive tracks but some of the more ‘off the beaten track’ paths had collapsed and were a bit tricky 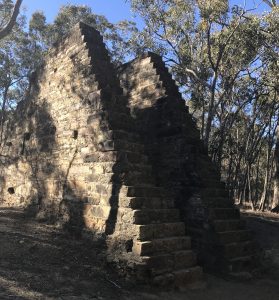 Remains of the Garfield Water Wheel, which at the time was the largest in the Southern Hemisphere

A highlight was the remains of the Welsh Village at Golden Gully. There was beautiful stone work here to see including the stone ruins of old miners’ cottages. I had a quick look around but found it so interesting that I will definitely go back to spend more time investigating this village of long ago.  My Welsh ancestry makes me interested in this area also. 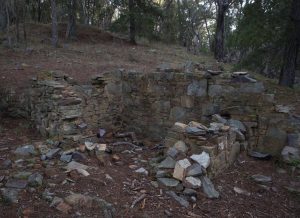 From there, the walk headed towards the Forest Creek flats and up to the top of a reservoir dam wall and spillway area.  From here the terrain was quite flat, as it headed back towards Chewton.
The flat walking was a bit of a relief after many hills earlier in the walk.

As I arrived back in Chewton, where this walk was to end,  I came across another walking trail, but this time with red markers and decided to follow it, unsure of where it would it would lead. By now I had walked 13k,  and I was keen to add a few extra kilometres. The trail eventually took me to the sight of the Red Ribbon Rebellion. Due to my interest in goldfields history, I’ve done quite a bit of reading about this event over the years, and  knew it was in the Castlemaine area.  But I didn’t realise there was a memorial, which flies the Red Ribbon Rebellion Flag. After looking around the memorial area, I headed towards the Pyrenees Highway and followed the walking trail back to Chewton.

This walk ticked all boxes for me. It was tough in places but not too tough, and passed many relics from the gold rush era.  It combined my two loves of hiking and history. 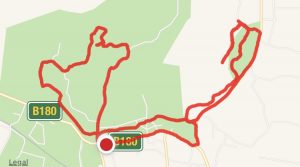